WHAT HUMANS EVOLVED TO EAT

The question of what humans evolved to eat is a pretty complex one, but it’s certainly one that’s worth exploring in more depth. It might help us to understand better what we should all be doing today in terms of how we organise and plan out our diets.

With so many trends and diet plans out there, making sense of which of them might actually help our minds and bodies most can be tough.

By carefully tracing our evolutionary processes and looking at why humans have evolved the way we have throughout our existence, we’ll seek to gain an understanding of what our bodies need from our diet. We’re going to discuss many of the most important topics and points of discussion relating to the question of what humans evolved to eat, so keep reading to find out more.

Why We have Herbivore Features
(2.7 Million Years Ago)

One of the main and stronger arguments for a plant based lifestyle in modern humans is our strikingly similar features to modern day herbivorous mammals.

All other primates like chimpanzees, baboons and gorillas live on a primarily plant based diet so it stands to reason that we should too, right?

Unfortunately, this argument is around 2.7 million years out of date because it doesn't consider what happened between the time those early ancestors lived and the time of modern humans. 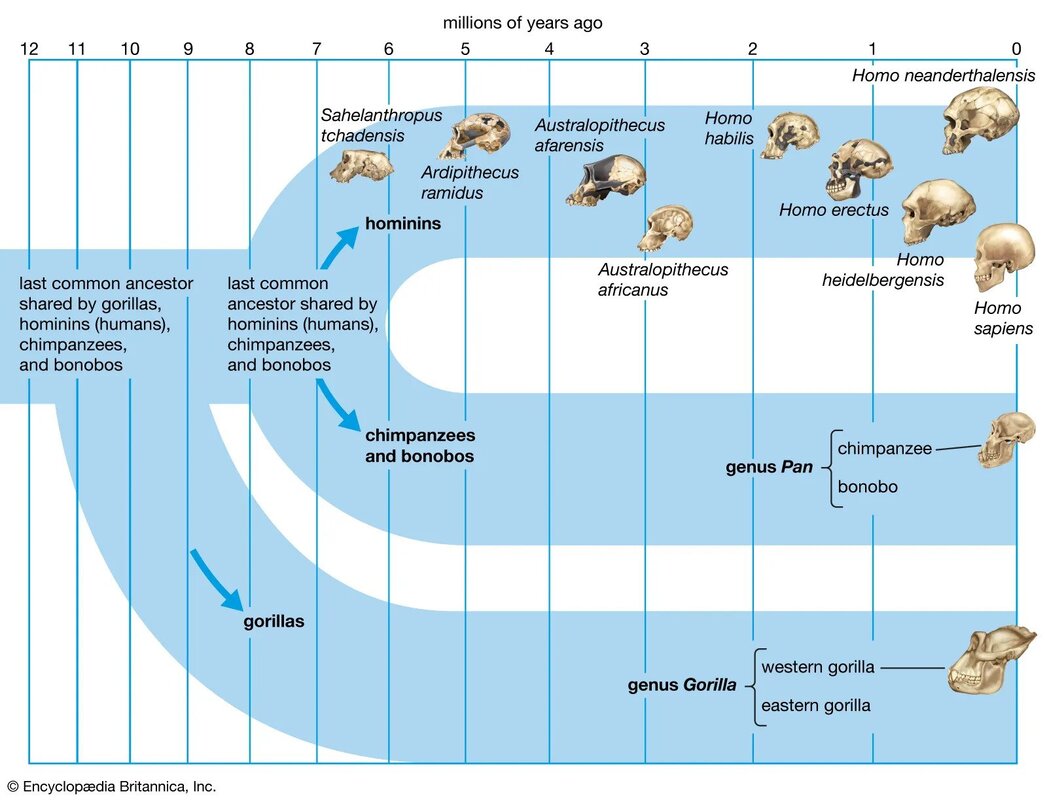 While we certainly shared a common ancestor with chimps and gorillas, our earliest hominin ancestors, diverged and became it's own species around 8 million years ago. These early hominins lived in woods and grasslands up to 2.7 million years ago and had massive jaws for chewing on roots and vegetation.

There’s no doubt that the early hominids, from which humans evolved, were herbivores and had a plant-based diet.

The environment of our planet changed roughly 3 million years ago. Plant foods became less readily available, at least the best ones did. And this also led to a reduction in forest and an increase in grassland.

If our ancestors were to survive on these grasslands, where predators roamed and the most nutritional source of foods were the leftover carcasses from these predators, we would be forced to adapt.

Homo Habilis did exactly that. They scavenged what they could, began to stand on two feet, used stone tools regularly and used their brain to a much higher degree than their ancestors.

Some hominids develop meat-rich diets as scavengers and the extra energy from fat and meat may have favoured the evolution of larger brains. Although some researchers attribute the larger brains to our need to communicate with one another too. 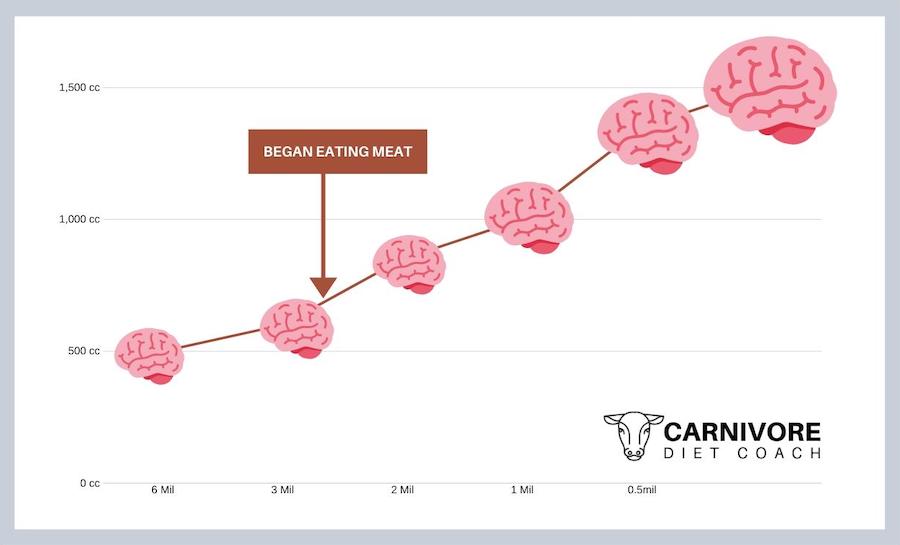 If our ancestors had carried on with their previous plant-based diets, they would more than likely have become extinct and there would be no homo sapiens today. Adaptability and changing habits is one of the most important aspects of human evolution through the ages and it’s something that shouldn’t be overlooked.

Once we started to consume meat, although we weren't on a mostly carnivore diet, we became Homo Erectus, the first hunter gatherers.

Homo Erectus were not necessarily good hunters and they weren’t exactly well-equipped to deal with the challenges of both hunting and being hunted by other predators. It became necessary to develop a different approach to hunting.

Rather than doing all the hard work themselves, Homo Erectus looked for ways to find meat without doing the difficult part of hunting the animals. They essentially became well adapted scavengers and looking to make the most of scraps that were left behind by other predators. It was a safer and more efficient way for human ancestors to find meat.

With an increase in brain size came an increase in energy demand, which, according to the expensive tissue hypothesis meant that something had to become less energy intensive. In the case of Home Erectus, that was the gut. The digestive system decreased in size due to the energy required to digest meat being much lower. 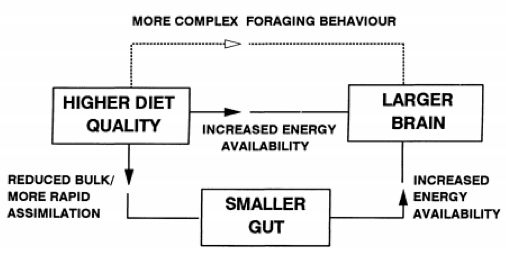 There is evidence that individuals of Homo Erectus were the first early humans to make hearths, to eat significant amount of animal meat and bone marrow, and to care for the old and weak. It was the longest-lived species on our family tree, surviving more than nine times as long as the current modern human species.

The Human Stomach
(1.6 Million Years Ago)

One of the most important parts of human evolution is the way in which the stomach evolved.  The digestion of meat improved, but the ability to digest plants decreased as the size of our colon decreased from the size of an adult forearm to the size of your little finger.

As you can see from the graph, the human small intestine increased in size drastically, while the colon reduced in size to handle more animal foods and less plant matter.

In turn, it evolved to be so acidic so that it could digest meat and fight pathogens. Check out this table from the study The Evolution of Stomach Acidity and Its Relevance to the Human Microbiome. 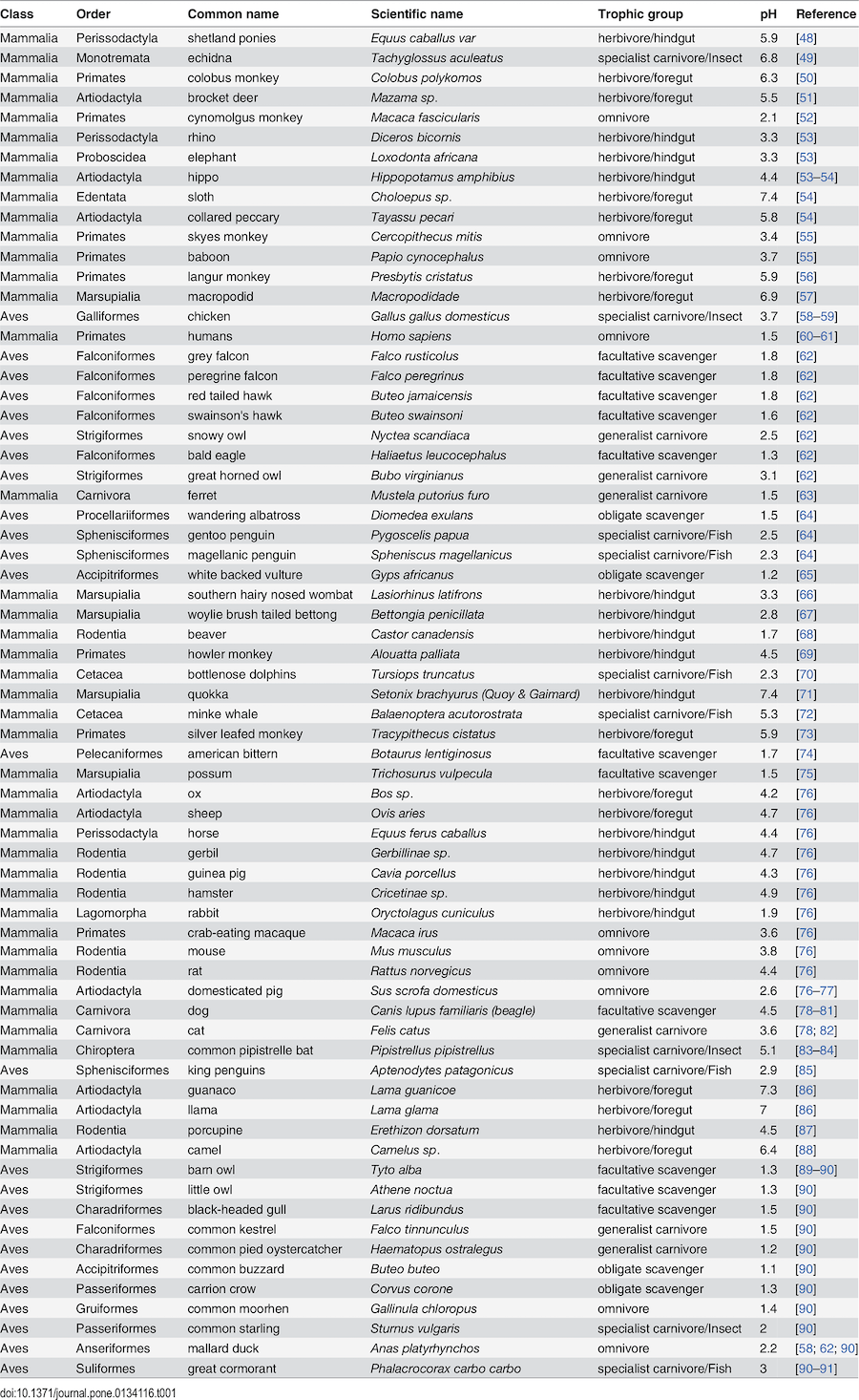 The study concluded "that stomach acidity increases with the risk of food-borne pathogen exposure and propose that the stomach plays a significant role as an ecological filter and thus a strong selection factor in gut microbial community structure and primate evolution in particular."

On the graph, you can see human stomach acidity sits at a PH of 1.5. An environment ideally suited to digesting animal foods and killing pathogens.

In other words, the acidity of the stomach is one of the key things that differentiates herbivores from carnivores. That increased acidity makes it possible to eat meat because of the ability to break down nutrients into their component parts and allowing the meat to pass into the small intestines. This clearly had an impact on how our ancestors developed their diets over time.

As time goes on, humans consume more and more meat. So much so that demand for meat is high enough to force early humans to become more hunter than gatherer.

Hunting as a human requires extremely complex skills like being able to read the environment, track animals and communicate with the tribe.

This massive growth in essential skills is also said to play a huge role in the rapid growth of the human brain. 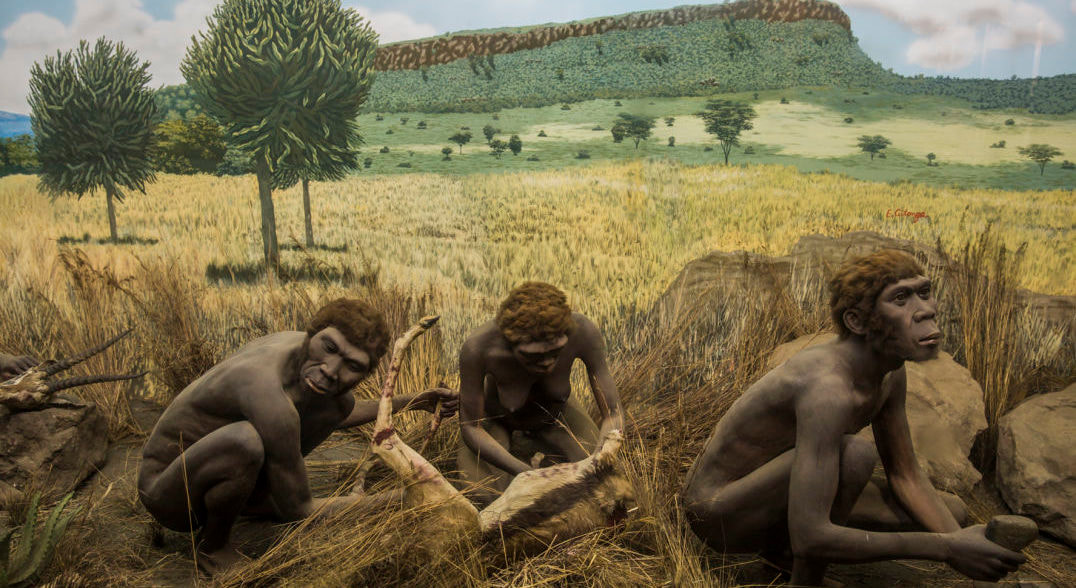 During this evolutionary process, humans became more like traditional carnivores and lost traits that are conventionally associated with herbivores. An example of this is the eating patterns of humans. Rather than grazing like herbivores who need to eat all day, humans began to eat meat intermittently, changing how food was consumed and when.

Rather than eating all day, we went through periods of feasting when food was available and fasting when it wasn't. Likely consuming what plants were available when times were hard.

We also attracted canines which would eventually become domesticated dogs. These dogs would feed off of the bones and scraps, much like our Homo Habilis ancestors. They certainly didn’t follow us around for our leftover carrots.

At the same time, the human gut became more and more like the carnivore gut. Our small intestines became better at digesting and absorbing proteins and fats, just like classic carnivores. Even the anatomy of our jaws changed during this time as our eating habits changed.

Our need for large molars for chewing through fibrous plants diminished so our jaw size and musculature decreased. As our ability to process and consume meat increased the need for large jaw muscles decreased and skull size grew larger.

The evidence for wild grass and fruit foraging goes back more than 100,000 years, but at around 10,000 years ago we begin to create villages and communities, and along with that, agriculture.

Whether or not this is a good thing is to be debated. Agriculture gave us the ability to settle, grow our own plant food and potentially not starve to death. Communities grew larger and there was safety in numbers and collaboration.

While our digestive systems evolved considerably for us to be able to obtain enough nutrition from plant foods, it's clear that we can. Especially as part of an animal based diet and in times where animal foods aren't available.

Many extreme carnivore enthusiasts argue that the introduction of agriculture is what shrunk our brains. 200,000 years ago our brain size was a massive 1,500cc’s and around the same time plant agriculture was introduced our brains began to shrink to 1,350cc’s. The brain size of modern humans.

Did it shrink because of the plant foods, or because we needed to use our brains less? Nobody knows for sure but it's clear that brain size does not correlate with intelligence so this is a weak argument at best.

So, what did we really evolve to eat? The trend is clear. We have become more equipped to eat meat-based diets and less equipped to consume plant-based diets. We started out as a species that solely ate plants, but that changed due to the myriad factors listed and discussed above.

Humans have also foraged fruits and wild grass for more than 100,000 years which suggests we've always eaten some plants. Combine that with the fact that 15,000 years ago our species as a whole decided that agriculture, the growth of edible plants, was a good thing, so it's obvious we also have the biological equipment to get some nutrition from plants.

Another point to consider is that our grandparents and great grandparents were typically though of as "healthy" and they ate plants in moderation too. The issue with modern food likely isn't that all plants are bad, it's probably more accurate to say that too many processed plants and seed oils are bad, and animal foods should be a staple in the human diet.

What We Should Eat FAQ

What About Our Teeth?

One of the arguments often made by vegans is that our teeth look a lot like the teeth of a herbivore and less like carnivore teeth. The fact remains that we are evolved from primates, and therefore, we’ll always share certain characteristics with primates, and that includes our teeth. These primates were herbivores, but that doesn’t mean humans necessarily should be.

Humans also have hands and used weapons and tools a very long time ago. As a result, large teeth and the force that most carnivores have with their bite and mastication simply wasn’t needed.

Humans are not quite pure carnivores and we never will be. We can make use of carbohydrates stored in plants but it’s not used in a particularly efficient way. We can still eat plant-based food but we can’t do so efficiently and we’re no longer well-suited to those kinds of diets.

Humans require essential amino acids (from protein) and essential fatty acids (from fat) or we die. However, there’s no such thing as an essential carbohydrate because we make our own via the liver. Humans can live a long and disease free life without any carbohydrates whatsoever.

Access lessons, meal plans and recipes and discover what The Carnivore Diet Coach can do for you.
Learn more

Join your fellow carnivores in the Carnivore Diet Coach Facebook Community and get answers to your burning questions.
Join Community

Members of The Carnivore Diet Coach get instant answers to their questions.
Ask a Question